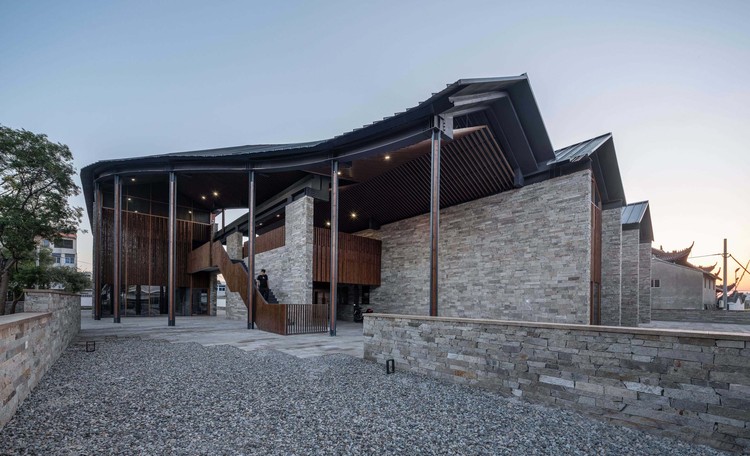 Cultural Auditorium. One Design has been committed to creating a public space integrating architecture to the landscape. In 2019, we accepted the invitation from the People’s Government of Pengjie Town, Luqiao District, Taizhou City to preside over the renovation of the public architecture in Xiaowufen Village, a typical village in southeast China. As the heart of the local village culture, the village hall is the symbol of the local culture and spirit. Due to the time limit during the construction of the old building, a thoroughly mining of the characteristics of the local culture was absent. To renovate it is just like a journey to discover and reinforce the culture of the old village rather than to restore a building or a piece of landscape.

Cultural mining. Xiaowufen Village locates in Pengjie Town, Taizhou. According to words passed down, once there were five families who came here and settled down, their offsprings flourished and form the village. The village was named after this story. The name was carried down to Today. Rather than adopting the conventional one bay arrangement for village halls in this area, at the beginning of the design, the team dug deep into the root of the village name “wufen”, and divided the whole architecture into five bays, so as to coordinate the small scale of the surrounding buildings and formed five buildings scattered along the street.

Venue & function. The site is in the shape of “L” and stretches on one side by the river. The design uses this feature to stretch and place the entrance hall/stairs/passage hall and interactive space accordingly, covering by the flowing and elegantly curved veranda, this place would become the spiritual fortress of the entire site.

Functionally, the building is divided into three parts, the multifunctional auditorium sits in the middle, the community services, and the villager committee office is located on both sides. A variety of functions are integrated into buildings under the same eave. There are spaces for celebrations and ceremonies during festivals, a stage, ancestral hall, banquet hall, and space for villager service used by the village committee in free times. Compared to the other village halls which are rigid and usually out of use for most of the time in Zhejiang, it has become a “rural cultural complex” that actually integrates multiple life scenes. A diverse rural settlement life is constructed under the flowing like the roof.

Material & structure. The “village cultural complex” uses local vernacular stone as its walls, traditional wooden finishes as windows, and is covered with modern steam shape steel roofs and transparent glass. It explores the locality through a method of drifting away from traditional and modern styles to study the possibility of modernizing rural architectures.

Practice & exploration. The rise of rural construction projects is a reflection of a series of problems brought about by urbanization. As the practice of acupuncture and moxibustion in the rural construction project, the village hall has the meaning: by redefining rural spiritual places such as the “cultural auditorium”, it redraws a splendid vision of a beautiful rural life and awakens people’s changes in the concept of urban and rural return.

Regional cultural architecture is an area that the team has been exploring in practice in recent years. The contradictory characteristics of this kind of project itself can provide a stage for the dramatic results of the project. Tradition and modernity, flow and foursquare, when architecture is telling stories, the team is exploring the way forward and heading on the road of future creation.