Vast areas in Wanigund village in southern Kashmir are under vegetable cultivation, yielding tonnes of produce throughout the year

Vast areas in Wanigund village in southern Kashmir are under vegetable cultivation, yielding tonnes of produce throughout the year

It’s always harvest season in Wanigund, a unique ‘vegetable village’ located some 55 km from Srinagar in southern Kashmir’s Kulgam district. All through the year, the residents are busy cultivating various kinds of vegetables. They till the land, manure and irrigate it, and later harvest and sell the produce in markets across the Valley.

Onions, carrots and collard greens are in season this time of the year. Spread across 400 kanals, the open fields run through several villages and are all owned and cultivated by the locals. All varieties are grown and harvested in tonnes throughout the year.

Almost every family in the village, which has about 250 households, is engaged in vegetable cultivation and dependent on the income from farming. The fields are also a source of income for a number of unemployed educated youth in the Valley.

Farooq Dandroo, chief agriculture officer of Kulgam, says Wanigund is the biggest vegetable cluster in Jammu and Kashmir. “Wanigund produces about 30,000 tonnes of vegetables every year and the yearly revenue from their sales ranges from ₹20 crore to ₹30 crore,” he says.

Vegetable cultivation began here in the 1970s after some village elders found the soil more suited for vegetables than rice.

Vegetable cultivation began here in the 1970s after some village elders found the soil more suited for vegetables than rice. “They found the soil had more moisture and began growing vegetables on a large scale. Soon, the entire village followed suit, enthused by the income generation,” says an elderly resident whose family has been involved in the practice for four decades.

“These fields are our backbone. We have inherited it from our parents and grandparents who grew vegetables on the same piece of land,” says Abdul Rashid, who owns about 4 kanals of land. His son his, who has MA and B.Ed degrees, also works on the fields full-time. 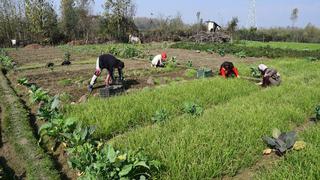 Almost every family in Wanigund is engaged in vegetable cultivation and dependent on the income from farming.

Abdul Majeed, 65, owns a couple of kanals and says he can earn about ₹1 lakh per vegetable from each kanal in a season, provided there’s no untimely rainfall. “It is the best land for vegetable cultivation. We have been working in these fields for decades,” he says. “From April to August, we produce about a thousand quintal of cucumber, which is sold throughout south Kashmir, and also transported to markets in central and northern Kashmir.

Rashid says the vegetable fields have the potential to produce more, leading to an increase in yearly revenue, and also offer employment to more local youth. Dandroo says the agriculture department is trying to provide a market for the produce from the village and supply high-tech polyhouses for seedlings. However, the villagers say they require government support for irrigation, developing the water canals, and obtaining market space for selling produce at competitive rates. 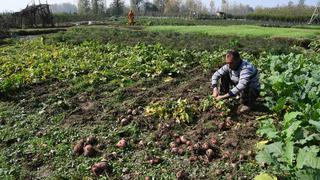 Wanigund produces about 30,000 tonnes of vegetables a year.

“The government and agriculture officials keep visiting and taking photographs but no major step has been taken to provide us irrigation or other facilities,” says Rashid.

“If the government provides us with market space, we can sell our produce for a good rate in a single place instead of traveling to various markets across the Valley,” says Majeed.

The writer is based in Srinagar.