Last month, Gene Akins retired as Chairman of the Board of Catalytic Generators, after serving the company for more than 40 years. He joined the company back in the 1970s after having met Catalytic’s founder at a small, local farm show. At the time, the founder was looking to leave for other ventures and needed a leader to care for and grow the business. They quickly became friends and Gene was hired as President in 1979.

Although Gene had experience working in the ag industry, the world of ethylene was new to him. With no time for university studies, Gene started his career in the farm business, selling tractors in Jesup, GA, followed by employment at Powell Manufacturing Company. They were creating new technologies for the tobacco industry and Gene helped grow the company into the major provider of planting, harvesting, and curing systems in the world. As he introduced these mechanizations, his travels he took him to South America, the Soviet Union, Africa, the Balkans, and Europe many times. Only when he joined Catalytic Generators, his venture his into the world of ethylene application started. “However, he became a quick learner, evidenced by the growth of the company,” his son his Greg Akins said.

Last month, Gene Akins retired as Chairman of the Board.

Developing safe ethylene application
At the time he started, Catalytic Generators was a very small, start-up company, and little was known about the method of safe ethylene application and the positive impact it had on the quality of fruit. He started with ripening bananas, and soon thereafter added field-grown mature tomatoes to the commodity mix. Eager to introduce safer ethylene application methods to ripeners, he was tireless in visiting ripeners throughout North America and growing the company.

“Gene led Catalytic to sell ethylene generators and Ethy-Gen II Concentrate all over the world, making us the primary ethylene application product in many countries,” said Greg. The company’s success in business cannot be just attributed to the sale of ethylene ripening products, Gene has always preached to his employees to take care of the customer by knowing their business and helping them to solve problems. This involved many employees having a deep understanding of the ripening process and standing ready to help new and experienced ripeners alike solve postharvest quality issues. 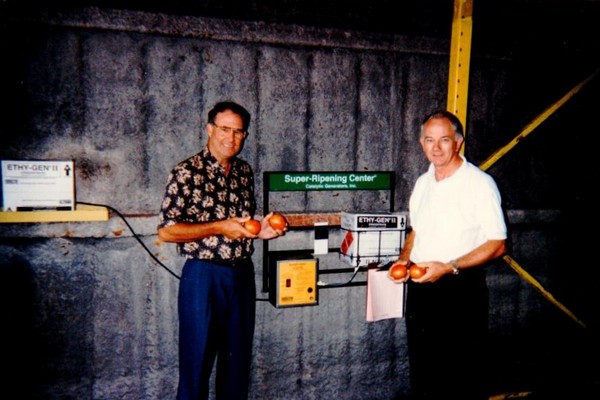 Tomato Man of the Year
When asked what Gene’s favorite commodity is, the answer was tomatoes. He worked diligently to promote field-grown mature tomatoes, helping both California and Florida growers with not only ethylene application but also strategic advice. He was the first supplier to be named to the board of the Florida Tomato Exchange. A prestigious honor, and a position he held for 25 years until stepping down in 2019. In fact, that year he was named the “Tomato Man of the Year” by the Committee, comprised of the major tomato growers and packinghouses in Florida. 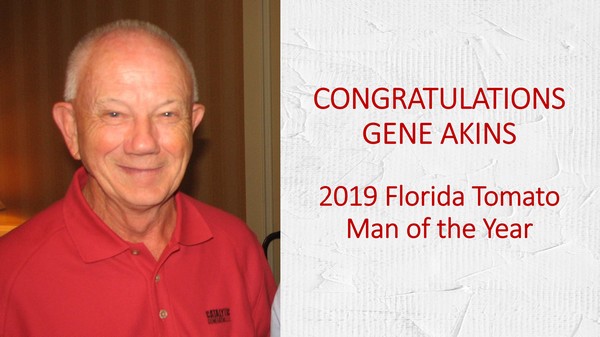 One of the highlights of Gene’s career was to work with Chiquita Brands management and Billy Martin on promoting banana consumption and proper ripening. At the time, Billy Martin was the manager of the NY Yankees. 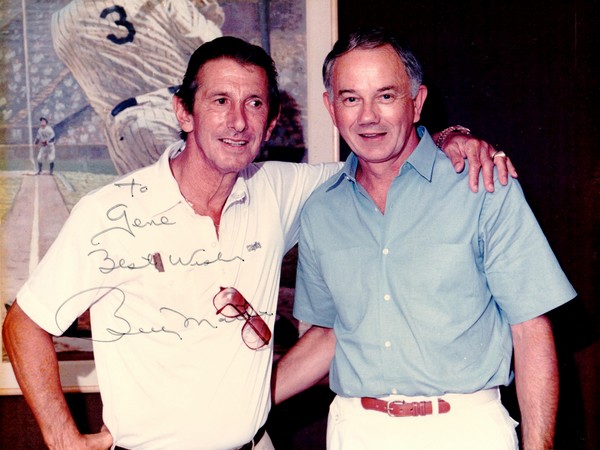 Billy Martin and Gene Akins in the late 1980s.

father and son
Gene’s son Greg has been leading Catalytic Generators for the past 28 years as the company’s President and CEO. What was it like, working alongside your dad? “Coming to work for a family member, especially your father, is not easy,” Greg said. “Expectations are high on both sides, and some could see your hire as favoritism. He liked to remind me that he would be harder on me than any other employee, and he was right. However, we ‘ve made a great team for 28 years, and it has been a great opportunity and blessing for us all at Catalytic to work under his leadership his. We’ll miss him.”

Congratulations Gene on an impressive career. Best wishes for a healthy and happy retirement.