Harrie explains this growing popularity is partly thanks to the increasing attention in the media. “There are articles about things like studies showing too many pesticides are still found on fruit. That helps; you couldn’t have better advertising.” Biofruit sells its growers’ organic apples and pears in the organic and regular retail channels and to wholesalers and exporters. For example, about half of Biofruit’s pears are exported to Scandinavia. “There’s high demand for good organic fruit,” he adds.

Biofruit is open to new forms of sales, too, and recently entered into a partnership with flash delivery company Gorillas. Harrie expects the Dutch organic apple and pear stock to run out in March, which is why, in mid-February, prices were sky-high. But there will still be four months with no organic top fruit to sell. That is a pity, he notes. “That, when we have the refrigeration capacity and the knowledge to supply organic top fruit year-round if there was enough volume available.”

minimal conversion
There are, thus, abundant opportunities for organic top fruit, Harrie says. Yet few conventional growers are switching to organic cultivation. Conventional farming is noticeably increasingly moving toward organic cultivation by banning more and more crop protection agents. The uncertainty about things like sales is an obstacle for many growers. Unnecessary so, Harrie thinks. “You can safely risk that. The first year you switch, you have to sell your crop conventionally.” 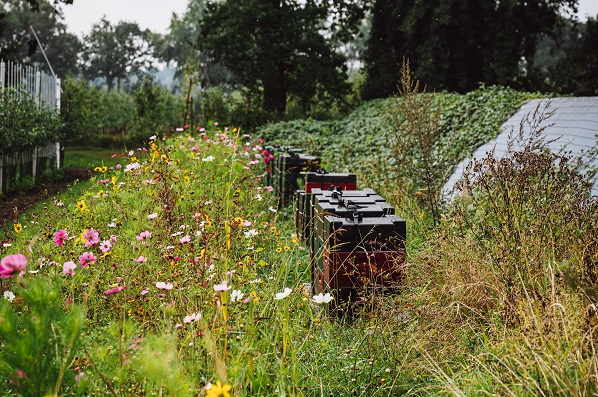 “The next two years, you can sell the fruit as transition fruit, bringing in quite good prices. And in the fourth year, the fruit’s organic,” Van de Elzen explains. Prisma Fruit is another Dutch organic fruit growers’ association. It reports that of the 2,500 fruit growers in the Netherlands, some 140 are organic. Their combined acreage of around 500 hectares is 2.5% of the total area.

And although conventional pesticides and using fertilizers are becoming less common, there are still quite a few opportunities. “There are plenty of organic fertilizers and pesticides. It just takes a bit more effort.” The fruit grower says the situation differs considerably in neighboring Germany. There, some eight to ten percent of top fruit growers are converting from conventional to organic cultivation. So, Biofruit exports little to Germany.

As conventional crop protection agents are increasingly being scrapped, Harrie expects interest in organic top fruit farming will also rise in the Netherlands. Though, he prefers to see people choosing organic fruit cultivation for ideological rather than economic reasons. “After all, organic cultivation also has strictly monitored restrictions.” Which is a good thing, says Harrie, who advocates clamping down on reported violations. “If you want to farm organically and get a good price, you have to stick to the rules. If you don’t, you should be ousted.”

Name recognition is a hurdle
Organic top fruit growers mostly cultivate robust, good disease-resistant apple and pear varieties. So, not the well-known Elstar or Conference. The general public is less, or not, familiar with these organic varieties. And that can sometimes be a disadvantage, notes Harrie. Besides flavor, name recognition is critical. “That’s missing with organic varieties, which sometimes hinders sales,” admits Van de Elzen. 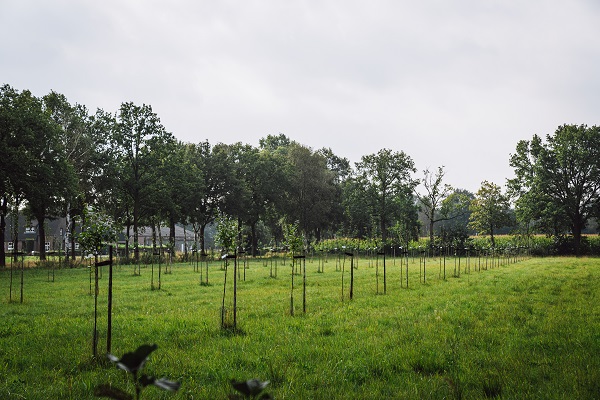 These organic, disease-resistant varieties taste just as good as their conventional counterparts. Harrie’s Dalinco apple is proof of that. In 2012, it was voted the Best Apple of the Netherlands by a jury and the public. Nevertheless, he expects using robust, resistant varieties to generally increase due to the pesticide ban in conventional cultivation. That will boost the organic varieties’ name recognition.

Sales boost
Harrie thinks the largest impetus for sales will be the availability of inexpensive organic fruit and vegetables. He looks to the government for this and believes they must reduce the VAT rate for organic produce to zero percent. Sales also, of course, depend on availability, which was somewhat limited because of the latest growing season.

“Things went wrong all over, with crop failures in Italy and Poland, so there’s less fruit, and prices are high.” That could be completely different next year. “Europe might well be bursting with top fruit in the coming growing season. For once, nothing might happen, and we could plow through winter and spring without any issues. Then, naturally, there’ll be plenty of fruit. I don’t know if we can maintain the current prices then,” Harrie concludes.