FURIOUS customers have complained their celebrations have been ruined by rotten and dead flowers on Mother’s Day.

And some bouquet deliveries failed to turn up at all with shoppers told florists have run out of blooms.

Disappointed buyers complained to on Twitter that the bunches they bought for Mother’s Day, including from M&S, Tesco and Sainsbury’s, did not live up to what was promised.

“Just received these flowers purchased yesterday and 80% of the bunch are totally dead. 0 days of freshness then,” one complained to Sainsbury’s.

Another furious shopper said: “You should be utterly ashamed for selling this bunch of flowers for £15! Tiny bunch and already rotting, just shameful!!”

Another “embarrassed” shopper shared a snap of the woeful looking stems they received from Marks and Spencer. 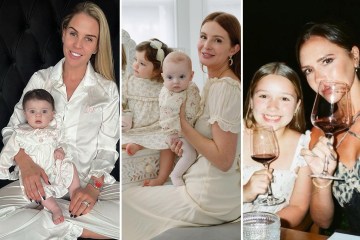 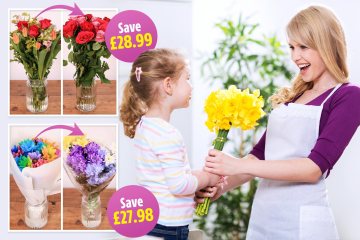 Next to it was another picture of the colorful blossoming bunch they were expecting.

“These are not just #MothersDay flowers. These are M&S flowers.(Unfortunately the 1st picture is the advertised flowers, the 2nd is the reality).

“Rip off. One (of many?) very disappointed Mums and embarrassed sons and daughters.”

The shopper told The Sun they paid £20 for the bouquet.

A Tesco shopper opened their bunch only to find they were rotten.

They tweeted at the supermarket: “You have the cheek to charge £10 for a bunch of flowers that would normally be £5 due to Mother’s Day.

“Opened them to find 80% rotten. To say I’m disappointed is an understatement.”

Another posted a video showing the “hand-picked with care” label on a £3 bunch of pink roses.

But they then turn them over to reveal the heads are brown on the other side.

The customer said: “Didn’t check these before purchase. Every year dead flowers in supermarkets, some £10 mothers day bunches were squashed and half dead.”

“Shouldn’t have to check, staff should check before putting them out for sale. Purchased in big Tesco, just hope my express store can replace.”

A Sainsbury’s spokesperson said: “We are sorry to hear a small number of our cut flowers are not meeting our high standards. Customers can contact us instore for a full refund.”

The Sun has contacted M&S and Tesco for comment.

On one of the busiest days of the year for ordering bouquets, some florists said they had run out, leaving mum’s empty handed on Mothering Sunday.

Instead of a confirmation of delivery, some Interflora customers were sent messages to say there were no flowers in stock.

“Unbelievable! One job” said one customer, and another, “ordered on Wednesday and you let me down the day before”.

A screengrab of the message said that “sometimes demand for our products can, at very short notice, exceed our supply in a given area.

Another buyer complained to the flower company: “So not only have you ruined my Valentine’s Day this year, you have also failed me on Mothers Day. What is going on with you?”

Interflora apologised to customers for letting them down in the message and said the full cost of the failed order would be refunded.

A spokesperson for Interflora said: “This Mother’s Day our local artisan florists up and down the country have been creating and personally delivering thousands of bouquets to help people connect and share their love.

“We’ve had questions about a small number of orders, but every order matters to us, so our fabulous customer care team always do all they can to put things right if they haven’t gone quite to plan.”

What are my rights of my Mother’s Day flowers go wrong?

If your flowers are already wilting, or have browning petals and leaves, you might be entitled to a refund.

This also applies if they arrived crushed, damaged, or don’t match the description online.

According to consumer group Which? your complaint should be covered under the Consumer Rights Act and must be made directly to the florist or shop where you bought them.

Your refund should include the initial cost of the flowers, as well as any delivery charges.

To start the process, you need to take a picture of your flowers to support your complaint – this goes for whether you’re the sender, or receiver.

Then provide the florist with as much information about your order as possible, include any order numbers and the delivery address.

You will also be able to get the delivery charges refunded if you paid extra for it to be delivered on a specific day.

We pay for your stories!

Do you have a story for The Sun Online Money team?