FRESH LOOKING Smuggled carrots, which appear to be recently harvested, have flooded the markets since 2021. —EV ESPIRITU

MANILA, Philippines — Local vegetable farmers are losing an average of P2.5 million a day with daily orders declining by up to 40 percent due to the influx of smuggled carrots into markets, senators were told Monday.

“Starting last year, the decline of our orders coming from the different key markets declined to 20 to 40 percent. Last year, 20 percent lang [it’s only 20 percent]but this year, because the volume of the smuggled carrots doubled, nag-doble na rin po yung decrease ng orders [the decrease in orders also doubled],” Agot Balanoy, public relations officer of the League of Associations at the La Trinidad Vegetable Trading Areas, said during the Senate Committee of the Whole inquiry.

“The monetary value of this percentage, at an average, is equivalent to P2.5 million per day, which is a loss on the part of the farmers,” she added. 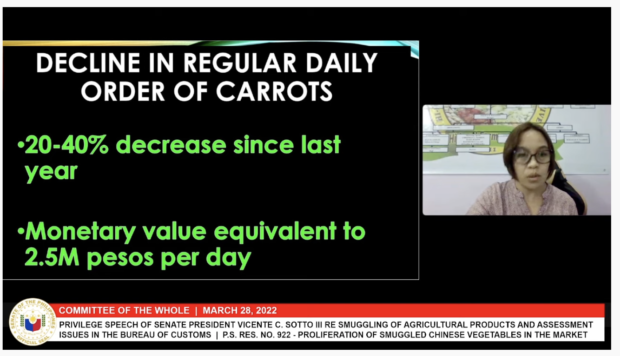 Agot Balanoy, public relations officer of the League of Associations at the La Trinidad Vegetable Trading Areas, during the Senate Committee of the Whole hearing on Monday, Mar. 28. 2022. Screengrab from Senate livestream.

The committee, led by Senate President Vicente Sotto III, resumed its investigation into the smuggling of agricultural products into the country. The first hearing was conducted in December 2021.

They are also tackling the “proliferation of smuggled Chinese vegetables in the market.”

But since the hearing last December, Balanoy said the influx of smuggled carrots into the markets has continued.

“Marami pa rin pong naglilipana sa mga markets natin [There is still an influx in the markets]despite all of those claims that there are confiscations that are being conducted by the agencies,” she said.

She showed a message from the group’s “informers” from Procy Market in Quezon province in March this year “further validating the distribution of many smuggled carrots.” 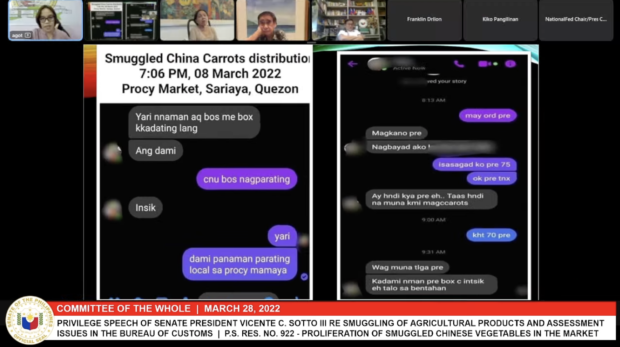 The smuggling of carrots into the country also led to “a lot of unsold local or Benguet carrots,” Balanoy further said.

“Because they—our consumers or our buyers in the end market—prefer to buy the smuggled carrots coming from China mainly because according to the consumers, the China carrots can be stored for two months and it will not be destroyed, while our benguet carrots are easily destroyed within two to three days,” she said.

“There are a lot of local carrots that are being dumped,” she added.

Sotto, meanwhile, cautioned Filipino consumers from buying carrots from abroad, saying most of them are supposedly infused with chemicals.

(Carrots from abroad, imported or smuggled, usually smuggled, the reason they would last for two months, they are infused with chemicals. That’s why they should not be bought.)

In Sotto’s opening statement, he stressed that apart from the revenue losses suffered by government due to the smuggling of agricultural products, local farmers are also faced with “diffculties” since they “have been competing directly with the influx of cheaper vegetable and fruit products. ”

“As we continue our discussions today, we will look further on the issues that were divulged during our first hearing. Apparently, aside from the main subject matter on smuggling of fruits and vegetables, revelations were made on the rampancy of smuggling in other agricultural products like pork, fish, chicken, rice, and sugar,” Sotto said.

“As aptly raised during the previous hearing, these smuggled agricultural products do not undergo testing for diseases – which not only can infect livestock and humans but if not solve can lead to the end or destruction of our local farms and products, or worse continuous smuggling can result to another pandemic,” he added.

Don’t miss out on the latest news and information.