Zelbo, who is best known for creating renders of upcoming Apple devices based on leaked information, including the Mac Studio, Studio Display, rumored mixed-reality headset, and more, believes that the ‌iPhone 14 Pro‌ models are likely to feature corners with larger radii . By cross-referencing CAD renders and dimensions, schematics, images of accessory production molds, and additional information, it is clear that the iPhone 14 Pro‌ is repeatedly being depicted with larger corner radii for a more rounded front and rear appearance compared to the iPhone 13 Pro. The ‌iPhone 14 Pro‌ Max, on the other hand, appears to have the virtually same radii as the ‌iPhone 13 Pro‌ Max. 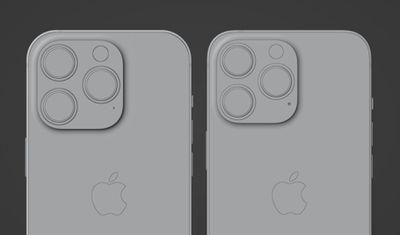 To scale render of the ‌iPhone 13 Pro‌ (right) and ‌iPhone 14 Pro‌ (left) rear with ostensibly accurate dimensions by Ian Zelbo.

It seems plausible that with another increase in size this year, the incongruence between the curves of the camera plateau, lenses, and corners of the stainless steel frame itself became too severe on the ‌iPhone 14 Pro‌, leading Apple to amend the design. The new, larger corner radii still do not exactly match the rounded corners of the rear camera array plateau, but are significantly closer, according to Zelbo. 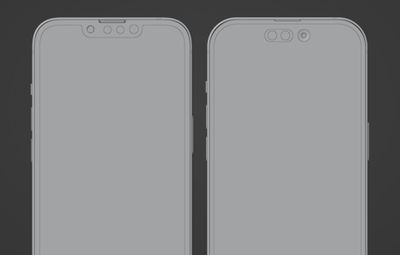 To scale render of the ‌iPhone 13 Pro‌ (left) and ‌iPhone 14 Pro‌ (right) front with ostensibly accurate dimensions by Ian Zelbo.

The ‌iPhone 14 Pro‌’s redesigned display may also have enabled the change. A centered pill and hole-punch shaped front-facing TrueDepth camera array in place of the notch is expected to be among the device’s headline upgrades, and it is also rumored to feature 20 percent thinner bezels around the display. It will have been necessary to redesign the display to achieve these changes, so a simultaneous change to the corner radii is feasible.

Similar information related to the iPhone 14 shows that this device does not share the new corner radius, which could indicate that the more rounded design is set to become another differentiating factor between the standard and “Pro” iPhone lines.

Zelbo is working on detailed renders of the ‌iPhone 14 Pro‌ based on a multitude of sources to provide a seemingly accurate look at what Apple’s next-generation Pro ‌iPhone‌ could look like when it is announced later this year. The renders will debut on Jon Prosser’s Front Page Tech soon.